This is me in the local paper, fame at last. 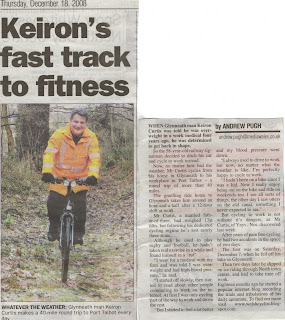 Sadly, you can't believe everything that you read, the reporter embellished the facts a little. To date I've only lost 1 and a half stone in weight, not 3 stone. However, I do try to commute to and from work, every day. Since starting to cycle I feel great, and would recommend it to everyone.
The picture and story appeared in the local "Neath Guardian" newspaper, the reporter, to my amazement, had discovered my blog, and sent me an email, asking if I'd mind him writing a piece about me. This happened just a few days after my fall on ice, my smile in the picture, is really a grimace of pain, as my shoulder was still very sore.
Anyway , I just thought I'd let you all see.
Despite very windy and wet conditions out today, I went for a ride on the Subway 1, for the fourth day on the trot. I'd promised a former neighbour of ours I'd call up to see him. Up is the right word, he now lives in Aberaman, a village the other side of Aberdare. Only about 8-10 miles away, but quite a climb up out of the Neath valley, over Rhigos, through Hirwaun, and then dropping down into the Cynon valley.
It's only recently, back in November, that I'd first climbed all the way up the Rhigos bank, as it's called locally, and then after a good couple of hours riding. This morning I thought about and decided against doing a warm-up, like a swift ride through the village. Big mistake, I had to stop three times on the climb, making my excuse, to myself, that I wanted to take a photograph or two. I managed OK for the rest of the trip, and spent an hour with Peter McNemin, chatting about old times etc.. It was good to see him again. 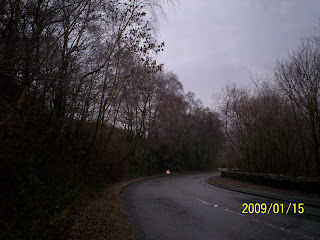 This is where I made my first breathless stop, probably a third of the way up the aforementioned Rhigos bank, looking back down the hill. Below is a pretty waterfall, that I "had" to take a picture of, for my second. 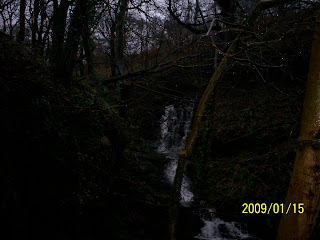 While this one below, is taken from close to the top of the Rhigos bank, looking back down and across the Neath valley, please excuse the raindrops on the photo. 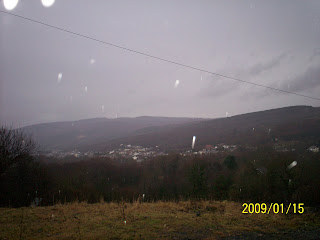 This one isn't a very good shot, but the best I could do from the roadside. The houses that are peaking through the trees, are Pontneathvaughan, or Pontneddfechan in Welsh, a small village about 2 miles up the valley from Glynneath, Cwm Nedd in Welsh. 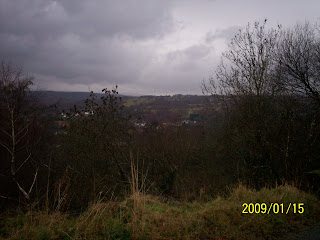 Another shot from the top, looking north towards the Black mountains, if my geography is correct. 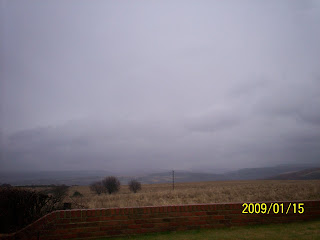 All in all it was a good morning's ride, I left at about 09.30, got to Pete's at roughly 10.45, spent an hour over a couple of cups of tea chatting, he also told me a few things about this digital camera of mine, that I know next to nothing about. Consequently, I now can store vast quantities of photos on it, instead of being limited to only 12. The trip back home was uneventful, but I did get very wet, and I discovered a new bicycle path, the Cynon trail, which I will need to explore in the future.

So a nice morning and I learnt something as well, to take the time to warm-up, before going straight into a climb, as well as better knowledge of my camers, cheers.

I have yet to make it into my local paper. Congrats!

Thanks Abhishek, and Doug, your comments came very quickly, I hadn't even finished the post, or perhaps, I published one part prematurely. Great to know you're out there. Cheers.

Nice one! Happy New Year from the wooly North!

Great! I always wanted to write a fan letter to someone famous - and now I have!