The clock's ticking down to the start of 2010, I'm afraid I'm not feeling very jovial. Over two weeks since I had a ride on my bike, either one, because of ICE.

I'm determined to go for a ride in the morning, because there's a saying about doing things on New Years day, which totally escapes me for the moment. Something along the lines of .... if you do something on New Years day, you'll be doing alot of the same through the new year....

It's dry out and so, even though the temperature is forcaste to drop to -3 degrees centigrade, means there should be no ice out there in the early hours to ambush me. No exercise on the bike has left me feeling, I don't know, just old. I'm feeling stiff after sitting down for an hour, and my legs are creaking, when I walk up and down stairs. It's amazing how quickly, and by the way, I would never describe myself as being anywhere near fit, one loses any kind of tone/capability/ or fitness for an activity of some sort.

Which obviously means, I've got to regain that "tone", or whatever you wish to call it. Sadly, that makes the pimple of a hill, at Aberdulais, which I've always thought of as my nemesis, even more daunting.

Wish me luck for the morning, and a Happy New Year to everyone out there in cyberspace, cheers.
Posted by we;shcyclist at 14:16 5 comments: Links to this post

This is my new bike, complete with Brookes saddle, disc brakes, 21 gears, fenders and rear pannier rack, only one problem, had her for a few weeks now, but haven't managed a meaningful ride on her. 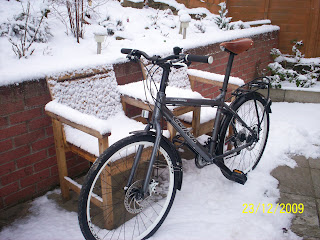 Up and down the street doesn't count. Didn't want to ride her on my commute, partly that, " oh I can't get it dirty", because it's new and shiny, but mostly because I need to get used to the new set up, i.e., the new Brookes saddle, and the 7 extra gears compared to my trusty Subway 1. Sice then it began snowing, and we've ended up with 4 inches of the stuff, that's been hanging around ever since in the form of ice, which after last year's fall I've got a very natural aversion to. So the poor girl's been locked up in the shed, all this time. 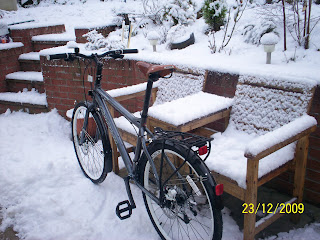 Today, I decided it was time to let the world see her, took her out of the shed into the cold -4 degrees centigrade, to take her portrait against the snowy backdrop. 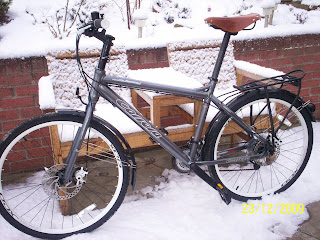 What do you all think?
For me, I hope she's going to be the perfect commuting bike, only time, actually in the saddle, will tell, so go away snow !!!

Posted by we;shcyclist at 09:15 8 comments: Links to this post

Not a good week, since Monday I've been involved in industrial action, i.e., on strike. It's over the company's decision to impose 8 hour rosters, at the new signalling centre in Cardiff, which we're all to be amalgamated into, over the next few years. We've all been working 12 hour shifts for over 10 years now, and anyway our national agreement with the company plainly states rosters are to be negotiated at a local level. The company has decided no negotiation, and want to force the issue, and because of other attacks on our national agreements all over the country, we were ballotted for strike action, here in south Wales.

I've been picketing outside my place of work, Port Talbot panel, and sadly had to witness, colleagues who resigned from the union, because they didn't like the ballot result, a weeks strike, going into work across the picket line. But Newport and Cardiff panels are all out. The company has drafted in managers from all over the country, to run the panels. The beauty is they are working 12 hour shifts to cover our absence, on top of which they have only had a few hours instruction on the panels. The last guy to qualify/ sign for our panel, at Port Talbot, took 6 months to do so. It must be a safety issue, but the regulating authorities, despite being informed of these irregularities, all turn a blind eye, on these occasions. Which basically means they are all in cahoots, even the government is on their side.

Ultimately, they, the company and government, want to defeat the unions, force down wages and workers conditions of service, such as pension rights, because the bankers have virtually bankrupted the country, while the government watched on and did nothing. Now they want the public to pay for their ( the bankers ) greed, and their ( the government's ) amateurism and incapability.

The lies they all tell, and it is we the public, who let them get away with it, everytime.